Are we or are we not? 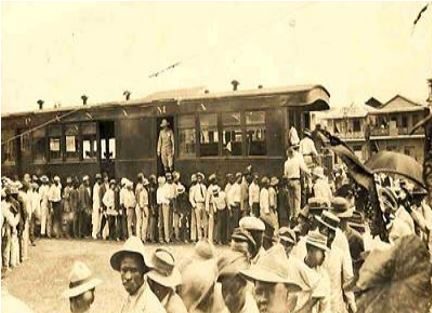 The horrific death of George Floyd has kept Americans on the streets for three weeks, in the midst of a pandemic that has already killed more than 100,000 in the country. The cry at the top of our lungs for an end to racial and social injustice goes out to small towns and big cities, and brings reflection to the world. In Panama, are we or are we not racists? Miroslava Herrera responded with this column

The mark of racism in the Americas is one. It is the scar of a crime: slavery.

To the simplistic eye, with the abolition of the slave system – state and private at the same time – the matter was resolved. In Panama it happened in 1851. But the abolition did not elevate the grandson of the slaves to the same status of humanity as the white Creole – neither here, nor there, nor anywhere else in the continent. With the tale of national identity and the bullshit of the cosmic race, the consequences were glossed over and the structural reduction of these people continued.

Slavery is the original sin of the style of protorepublican society that was implanted in this land back in the 1500s. A society that is still the same today as it was 500 years ago. It was evident long ago, but in these days it has become as strong and certain as an axe – or as brutal as the force that cuts you to death: this society has a male, conservative, white, rich, right-wing, racist, all-digit boss.

What is the place in such a society for Indians and Blacks, and all the possible combinations? What are the options? Can they make projects for their communities, their own lives? Can they even plan a semester? Something out of «echar para adelante»?

There is racism in Panama. Here racism manifests itself as a tremendous fear of being associated with being a poor black man. Our democracy is based on contempt for our African ancestry. Here being black is associated with disadvantage whose main mark is the color of one’s skin naturally. So in Panama, many people do everything they can to get rid of any mark that links them to their African ancestor. This deep self-hatred sets us against each other and makes us easy prey for those who exploit that weakness.

«There in El Chorrillo live negros», «with that hair, nobody will hire you», «we must improve the race», are some of the testimonies that return to our ears every May. Expressions, statues, books, songs, sayings that range from being direct killers of human dignity to generalized subtle reasoning. All destined to fracture the psyche.

As massive as this contempt is, the push from «those at the bottom» has produced a hopeful and powerful middle class, the economic force of the nation. That famous «echar para adelante» is because you come from behind. But that stripe is shackled: in the human desire to live a better life, it is mutilated from the powerful force of its heritage.

The heroes of this spiritual force are not few: Bayano, Armando Fortune, Melva Gooding, Gerard Maloney, Alexandrina Lan, Boris Gondola, to mention just a few. Their achievements have resulted in the empowerment of an increasingly alert and assertive Afro community.

We have developed a great work of cultural collection, of memory rescue; there is a vast collection of works and documents about the African ancestry. But the claim for the vindication of their human rights is still pending from the legislature.

This is called reparation.

It begins by challenging the usual rhetoric. What is taught and not taught in schools must change. Imagine if from childhood you are told flatly that black Panamanians come from slaves and nothing else, what kind of ideas will that child develop?

There is no conversation here about systemic racism. One that is entrenched in public policy. Racism that is exercised by the selfish status quo, led by that top man-conservative-white-right-racist minority. That’s why saying that «there is no racism in Panama» sounds like nails in a blackboard for those who live it every day. As if a phrase said from privilege had the power to make invisible the immense pain of entire generations lost.

The spectacular outburst of consciousness in the U.S. over the police murder of George Floyd has turned up the volume of the clamor of an abused population. One that has very little doubt about its identity.

We had that here. We had the bad luck to see this gringo-brand barbarity combined with coloniality itself, for decades in the Canal Zone. But could this awareness that changes things in Panama emerge? Would we march now for George Floyd as we did not march for Jeronimo Tugri?

«The native drunks and drug addicts have nothing to lose and are harming an entire country,» tweeted then Congresswoman Marylin Vallarino, in February 2012, when Panamanian police murdered Tugrí.

Conincidentally, we have our own Floyd.

Floyd Britton was a Panamanian student leader and revolutionary leader. In 1969, he was first persecuted, then imprisoned, then tortured with the fury of a thousand beasts. «…during these public tortures I felt Floyd Britton complain, I saw him with bleeding eyebrows and minutes later I fell next to him receiving both a great deal of blows inflicted by the National Guard’s clubs on our backs, kidneys, buttocks and thighs. After about noon we were placed barefoot on hot iron plates… Throughout the beating, the policeman expressed great hatred for Britton and said things like this: I don’t know what a white woman saw in you, being such an ugly black man. This was told by a witness, Alvaro Menendez Franco. Our Floyd’s bones are still missing.

We have our own Floyd, but we don’t have just one.

These days, without going any further, the violinist Joshue Ashby -a member of the symphony orchestra, a graduate with honors from the National Conservatory of Music, a scholarship from the Berklee College of Music in Boston, a professor and a father from Colón – told on his social networks the countless times that the police have harassed him regardless of his education and good manners, just because he was black.

At the same time, we were getting video footage of a cop beating up a Colón man for selling fish out of quarantine. The scene, if the outcome is not known, could be described as ridiculous: a cop dressed in a camouflaged war jacket, his face covered by a balaclava, a rod in his right hand, yells at a man in a sweater and mask, three fish in a plastic bucket next to him, another cop in a combat helmet and handcuffs behind him. It is not well understood why – is he selling drugs? breaking into the Garzas’ palace? pointing a sophisticated weapon at someone? – but when the seller begins to put his fish away, one cop grabs it and the other unloads a fury like an ancestral, completely unhinged, on him, until he leaves it on the floor. In the video, a voice screams the spark of injustice: «No foquin respetan».

That is racism. And racism is much more than that. More than beatings, more than insults, more than prejudices held in our irrational political tradition.

Our fragile democracy has a chance to overcome this self-hatred. There are toxic heritages, and it is our duty today to tear down all racist altars in this country. The way to approach that idyllic bridge- of-the-world postcard is to unite all who live in this country in an embrace of equity and hope. When we do that, when we stop watching the revolution on the cell phone and take to the streets together demanding justice, things will be different. The chorus is getting stronger.

About the author, Miroslava Herrera Barsallo. Singer, composer, historian and journalist, in the eight hundred thousand things that Miroslava does every day there is an unmistakable stamp: radical depth. Coclesana, she spent her childhood in Panama City listening to Roberto Carlos and reading Galeano. When she finished college, she wanted to see with her own eyes a broken region. She took her backpack and set off on a decade-long journey to see a land and a history that is her own. She went through the United States, Canada, Costa Rica, Nicaragua, El Salvador. When she returned to Panama, she worked on the historical documentation of the Canal Expansion and founded with Tatiana Ríos Afrodisíaco, a group that rescues and promotes Afro-Panamanian rhythms. For Concolón magazine, she asked whether or not we are racists. 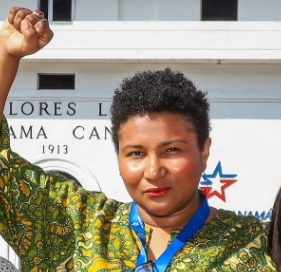 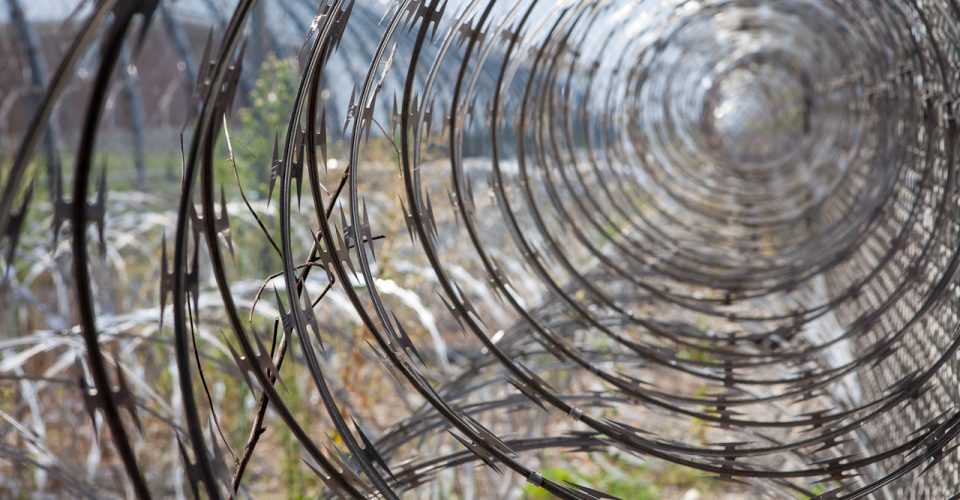 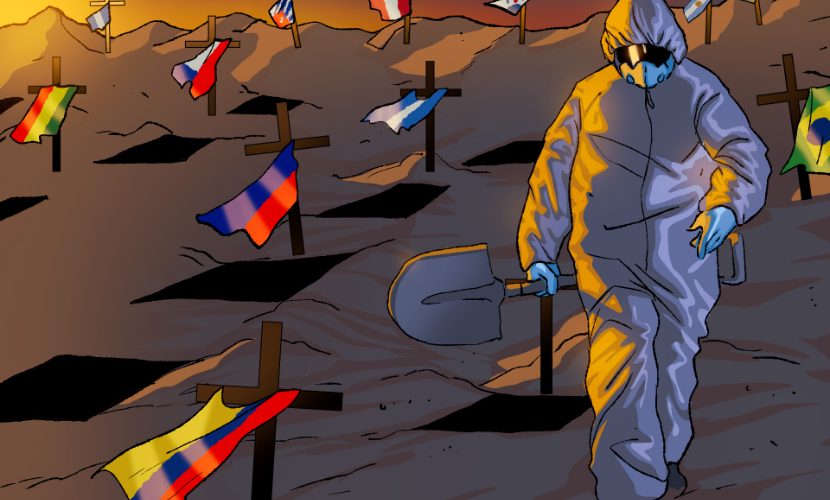